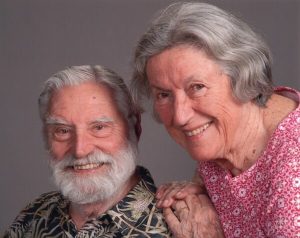 John and Janet made the first trip to Scotland with their three children in 1979. They flew on a British American Club charter, armed with a booklet called “600 Things to See in Scotland.” One of the 600 things to see was the Clan Donnachaidh Museum in Bruar, which was their first contact with the Society. A year later they were part of the group starting the Northern California Branch of the Society, and they attended their first AGM in Bruar. Since then they have attended the AGM most years, and learned about many ways to travel and many places to stay.

Today they are both retired. John retired as a priest of the Episcopal Church and Janet retired as a public school teacher. Along the way John has been President of the Northern California Branch, and is currently treasurer. In retirement John served two terms on the Clan Donnachaidh Council. A deeply treasured experience was serving as Baron Baile in the inauguration of Struan as our Chief in 1983.

John and Janet are active in the Northern California Branch, and in their Church. They are musicians in the Cabrillo College orchestra and band, and sing in their church choir. Janet is a successful artist, mostly doing watercolors, but more recently acrylics. Their home is within sight, sound and smell of the Monterey Bay in California.

As Journey Home Consultants they are not travel agents and will not make bookings, but they can tell you how to make them. They have a working knowledge of the differences between American and British English and can tell you what a “caravan” is. Their own travel preferences are for “self-catering” places where you can fix your own food and for public transport. They have done car rental (hire) and even purchased a car while spending sabbatical time in Scotland. They prefer the less expensive and sometimes rougher accommodations, but believe they can help you find what is best for you and your tastes and budget.
You can contact them from this link: Contact John & Janet